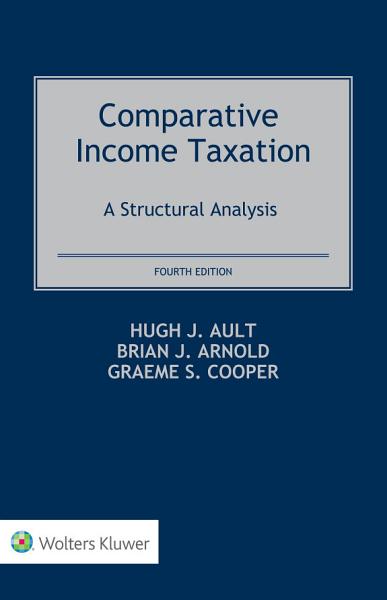 Comparative Income Taxation A Structural Analysis Fourth Edition Hugh J. Ault, Brian J. Arnold & Graeme S. Cooper In complex national income tax systems, structural and design variations from one country to another present major obstacles to the kind of comparative understanding that economic globalization requires. Hence the great significance of this outstanding book, highly acclaimed through three previous editions and now thoroughly updated to encompass the latest changes and trends. In it, leading authorities from eleven of the world’s most important national taxation systems each contribute their particular expertise to a study of specific crucial problems of tax design. In addition to the nine countries covered in previous editions—Australia, Canada, France, Germany, Japan, the Netherlands, Sweden, the United Kingdom and the United States—China and India have now been added to provide the perspective of developing countries. Individually authored country descriptions outline the climate and institutional framework in which each of the eleven national taxation systems’ substantive rules operate. All the country descriptions are analyzed in accordance with a common format to facilitate comparisons of the ways in which the countries’ tax systems are similar and in which they differ. They form the background to an expertly informed comparative analysis focusing on three major areas: basic income taxation, taxation of business organizations and international taxation. Most of the rules especially important for international business and investment are dealt with here, including (among many others) rules on the following: classification of business entities; taxation of corporations and their shareholders; corporate organization and restructuring; taxation of partnerships; residence and source taxation; controlled foreign company rules; restrictions on the deduction of interest; courts dealing with tax matters; and effect of tax treaties. Several new topics—including the classification of employees and independent contractors, the taxation of pensions, patent box regimes, the taxation of indirect transfers and the tax challenges of the digital economy—have been added. Especially timely are discussions of changes stemming from the G20/OECD Base Erosion and Profit Shifting project. The introduction has also been expanded to include a new section on European Union (EU) law as it affects the tax laws of EU Member States. This new edition of a classic source of information and analysis for students, professors, researchers, tax practitioners and tax policy officials on the different ways that countries design their income tax systems will be widely welcomed by the international tax community.

International Company Taxation in the Era of Information and Communication Technologies

Authors: Anne Schäfer
Categories: Business & Economics
Type: BOOK - Published: 2007-12-18 - Publisher: Springer Science & Business Media
Anne Schäfer presents proposals for the reform of the definition of a company's residence, the definition of the permanent establishment, the possibilities of profit allocation and the methods to avoid international double taxation. In addition, the interrelations between these issues are taken into account. Amongst others, the author argues for