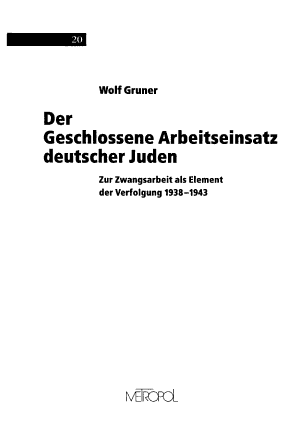 Authors: Wolf Gruner
Categories: Forced labor
Type: BOOK - Published: 1997 - Publisher:
Discusses forced labor of the Jewish population in all German-occupied countries, beyond the system of concentration camps, during World War II. Before the war 20,000 Jews worked at forced labor under discriminatory conditions. After the "Kristallnacht" pogrom, segregated forced labor was considered part of a new orientation of Nazi anti-Jewish

Authors: Dieter Maier
Categories: Deportation
Type: BOOK - Published: 1994 - Publisher:
Both before and during the war, Germany suffered from a critical manpower shortage. One way in which the Arbeitsverwaltung (the Employment Administration) attempted to solve this problem was the use of Jewish slave labor. Jews were employed mainly in public works, later in war industries, and were strictly segregated from

The Origins of the Final Solution

Authors: Christopher R. Browning
Categories: History
Type: BOOK - Published: 2007-05-01 - Publisher: U of Nebraska Press
This groundbreaking work is the most detailed, carefully researched, and comprehensive analysis of the evolution of Nazi policy from the persecution and "ethnic cleansing" of Jews in 1939 to the Final Solution of the Holocaust in 1942.

Authors: Wolf Gruner
Categories: Forced labor
Type: BOOK - Published: 2000 - Publisher:
In Germany, forced labor as a component of a new strategy of persecution was discussed in fall 1938, and applied in the entire Reich after the "Kristallnacht" pogrom. 190,000 Jews lived in Austria at the time, 90% of them in Vienna. The persecution of Austrian Jews was executed with particular