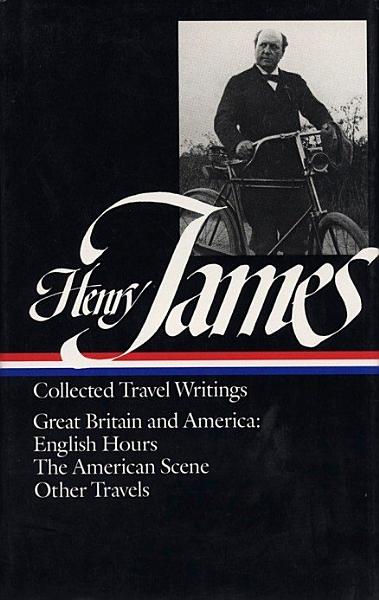 Collected in this Library of America volume (and its companion) for the first time, Henry James’s travel books and essays display his distinctive charm and vivacity of style, his sensuous response to the beauty of place, and his penetrating, sometimes sardonically amusing analysis of national characteristics and customs. Observant, alert, imaginative, these works remain unsurpassed guides to the countries they describe, and they form an important part of James’s extraordinary achievement in literature. This volume brings together James’s writing on Great Britain and America. The essays of English Hours (1905) convey the freshness of James’s “wonderments and judgments and emotions” on first encountering the country that became his adopted home for half a century. James includes the vivid account of a New Year’s weekend at a perfectly appointed country house, midsummer dog days in London, and the spectacle of the Derby at Epsom. Joseph Pennell’s delightful illustrations, which appeared in the original edition, are reprinted with James’s text. In The American Scene (1907) James revisits his native country after a twenty-year absence, traveling throughout the eastern United States from Boston to Florida. James’s poignant rediscovery of what remained of the New York of his childhood (“the precious stretch of street between Washington Square and Fourteenth Street”) contrasts with his impression of the modern, commercial New York, a new city representing “a particular type of dauntless power.” Edmund Wilson, who praised The American Scene’s “magnificent solidity and brilliance,” remarked that “it was as if. . . his emotions had suddenly been given scope, his genius for expression liberated.” Sixteen essays on traveling in England, Scotland, and America conclude this volume. The essays, most of which have never been collected, range from early pieces on London, Saratoga, and Newport, to articles on World War One that are among James’s final writings. LIBRARY OF AMERICA is an independent nonprofit cultural organization founded in 1979 to preserve our nation’s literary heritage by publishing, and keeping permanently in print, America’s best and most significant writing. The Library of America series includes more than 300 volumes to date, authoritative editions that average 1,000 pages in length, feature cloth covers, sewn bindings, and ribbon markers, and are printed on premium acid-free paper that will last for centuries.

Authors: Henry James
Categories: Travel
Type: BOOK - Published: 1993-09-01 - Publisher: Library of America
Collected in this Library of America volume (and its companion) for the first time, Henry James’s travel books and essays display his distinctive charm and vivacity of style, his sensuous response to the beauty of place, and his penetrating, sometimes sardonically amusing analysis of national characteristics and customs. Observant, alert,

Authors: Henry James
Categories: Travel
Type: BOOK - Published: 1993-09-01 - Publisher: Library of America
Henry James’s travel writings are at once literary masterpieces, unsurpassed guidebooks and penetrating reflections on the international themes familiar from his fiction. This volume, the second of two, begins with the classic A Little Tour in France (1900), illustrated with Joseph Pennell’s exquisite drawings from the original edition. James begins

Authors: Francis Parkman
Categories: History
Type: BOOK - Published: 1983-07-04 - Publisher: Library of America
This Library of America volume, along with its companion, presents, for the first time in compact form, all seven titles of Francis Parkman’s monumental account of France and England’s imperial struggle for dominance on the North American continent. Deservedly compared as a literary achievement to Gibbon’s The Decline and Fall

Authors: James Fenimore Cooper
Categories: Fiction
Type: BOOK - Published: 1985-07-01 - Publisher: Library of America
The five novels in The Leatherstocking Tales (collected in two Library of America volumes), Cooper's great saga of the American wilderness, form a pageant of the American frontier. Cooper's hero, Natty Bumppo, is forced ever farther into the heart of the continent by the advance of civilization that he inadvertently

Authors: James Fenimore Cooper
Categories: Fiction
Type: BOOK - Published: 1985-07-01 - Publisher: Library of America
When Cooper's most memorable hero, Leatherstocking, started an American tradition by setting off into the sunset in The Pioneers, one early reader said of his departure, "I longed to go with him." American readers couldn't get enough of the Leatherstocking saga (collected in two Library of America volumes) and, fourteen

Authors: Mark Twain
Categories: Fiction
Type: BOOK - Published: 1982-11-01 - Publisher: Library of America
Mark Twain is perhaps the most widely read and enjoyed of all our national writers. This Library of America collection presents his best-known works, together for the first time in one volume. Tom Sawyer “is simply a hymn,” said its author, “put into prose form to give it a worldly

Authors: William L. Andrews, Henry Louis Gates
Categories: Literary Collections
Type: BOOK - Published: 2000-01-15 - Publisher: Library of America
The ten works collected in this volume demonstrate how a diverse group of writers challenged the conscience of a nation and laid the foundations of the African American literary tradition by expressing their in anger, pain, sorrow, and courage. Included in the volume: Narrative of the Most Remarkable Particulars in

Authors: Jack London
Categories: Literary Collections
Type: BOOK - Published: 1982-11-01 - Publisher: Library of America
By turns an impoverished laborer, a renegade adventurer, a war correspondent in Mexico, a declared socialist, and a writer of enormous popularity the world over, Jack London was the author of brilliant works that reflect his ideas about twentieth-century capitalist societies while dramatizing them through incidents of adventure, romance, and

Authors: Washington Irving
Categories: History
Type: BOOK - Published: 2004-01-26 - Publisher: Library of America
America’s first internationally acclaimed author, Washington Irving established his fame with tales of the Hudson Valley in the days of Dutch rule, and then spent seventeen years in Europe mining the Old World for stories. When he finally returned to the United States, he embarked on a trilogy of books