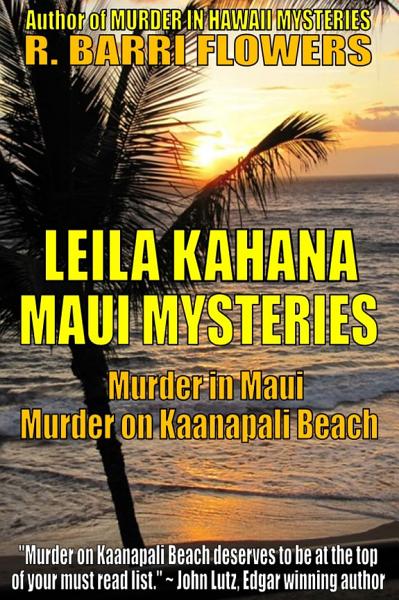 Leila Kahana Maui Mysteries Bundle contains the first two complete novels in the Leila Kahana Mystery series, including Murder in Maui and Murder on Kaanapali Beach, as well as a novelette, Kaanapali Beach Paradise. Murder in Maui (A Leila Kahana Mystery) In this first novel of the series, set in the lush, deceptively idyllic tropical paradise of Hawaii, Maui County homicide detective and composite sketch artist Leila Kahana and her partner, Detective Sergeant Blake Seymour, investigate the execution-style murder of two prominent doctors in an upscale condominium. Larry Nagasaka and Elizabeth Racine are found lying naked in bed in a pool of their own blood. It is learned that they were married, but not to each other, and that the doctors belonged to a prestigious medical association. Assisting the detectives in the case are fellow members of the homicide squad, Detectives Trent Ferguson and Rachel Lancaster, run by Lieutenant Paul Ortega who is contemplating retirement. As they interview suspects and collect evidence, more doctors belonging to the medical association are murdered, making it clear to all that they have a ruthless and determined serial killer on their hands. Murder on Kaanapali Beach (A Leila Kahana Mystery) In the second book in series, Maui County homicide detective and composite sketch artist Leila Kahana and her new partner, Detective Jonny Chung, take on the case of a college instructor found murdered on the island's famed Kaanapali Beach. Joyce Yashiro, estranged from her husband, was suffocated when she was forced face down into the soft sand on the beach. In a seemingly unrelated case, Detectives Rachel Lancaster and Trent Ferguson investigate the execution-style murder of businessman Parker Breslin in front of his Kihei home. As the investigations progress with a myriad of suspects, a surprising connection between the investigations emerges. But is there one killer or two? As these cases move full steam ahead, there is also a brutal serial killer on the loose. Dubbed the "Zip Line Killer," he has been terrorizing women on the island, strangling them with a zip line, for over a year, while staying out of reach of the authorities. Do they finally have a break that can put this frightening killer behind bars before he strikes again? Kaanapali Beach Paradise (A Novelette) Set amidst the lush playground of Maui, Hawaii's famed Kaanapali Beach Resort, the soap opera style tale of adultery, ambition, dark secrets, love, lust, hate, romance, betrayal, revenge, and murder, revolves around the anticipated grand opening of the Kaanapali Palms Hotel, the newest luxury accommodation on this three mile-long ocean front stretch of paradise on the island's western shore. Kaanapali Beach Paradise is the first in a continuing series of novelettes that promises to keep readers engaged as lives and loves are turned upside down with twists at every turn amidst the splendor of a celebrated Hawaii beach resort.

Murder in Hawaii Mysteries 5-Book Bundle: Murder in Maui\Murder in Honolulu\Seduced to Kill in Kauai\Dead in Pukalani\Murder on Kaanapali Beach

A Reason to Live