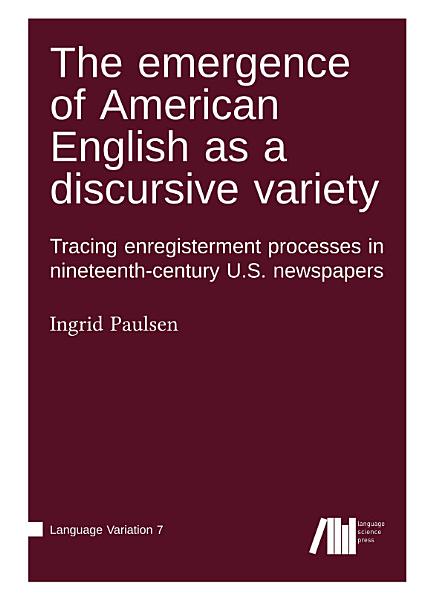 Do speakers’ identity constructions influence the emergence of new varieties of a language? This question is at the heart of a debate about how the process of the emergence of postcolonial varieties of English can best be modeled. This volume contributes to the debate by linking it to models and theories proposed by anthropological linguists, sociolinguists and discourse linguists who view identity as a social and cultural phenomenon that is produced through linguistic and other social practices. Language is seen as essential for identity constructions because speakers use linguistic forms that index social ‘personae’ as well as specific social practices and values to convey an image of self to other speakers. Based on the theory of enregisterment that models the cultural and discursive process of the creation of indexical links between linguistic forms and social values, the argument is made that any model of the emergence of new varieties needs to differentiate carefully between a structural level and a discursive level. What emerges on the discursive level as a result of processes of enregisterment is a ‘discursive variety’. The volume illustrates how the emergence of a discursive variety can be systematically studied in a historical context by focusing on the enregisterment of American English as it can be observed in nineteenth-century U.S. newspapers. Using a discourse-linguistic methodological framework and two large databases containing close to 78 million newspaper articles, the study reveals a complex pattern of indexical links between the phonological forms /h/-dropping and -insertion, yod-dropping, a lengthened and backened bath vowel, non-rhoticity, a realization of prevocalic /r/ as a labiodental approximant as well as the lexical items baggage and pants on the one hand and social values centering around nationality, authenticity and non-specificity on the other hand. Qualitative analyses uncover the social personae associated with the linguistic forms (e.g. the American cowboy, the African American mammy and the ‘Anglo-maniac’ American dude), while quantitative analyses trace the development over time and show that the enregisterment processes were widespread and not restricted to a particular region.

The emergence of American English as a discursive variety

Authors: Ingrid Paulsen
Categories: Language Arts & Disciplines
Type: BOOK - Published: 2022-03-14 - Publisher: BoD – Books on Demand
Do speakers’ identity constructions influence the emergence of new varieties of a language? This question is at the heart of a debate about how the process of the emergence of postcolonial varieties of English can best be modeled. This volume contributes to the debate by linking it to models and

Language and Identity in Englishes

Authors: Urszula Clark
Categories: Language Arts & Disciplines
Type: BOOK - Published: 2013-04-12 - Publisher: Routledge
Language and Identity in Englishes examines the core issues and debates surrounding the relationship between English, language and identity. Drawing on a range of international examples from the UK, US, China and India, Clark uses both cutting-edge fieldwork and her own original research to give a comprehensive account of the

The Oxford Handbook of African Languages

Studies in the History of the English Language

Authors: Teun Adrianus van Dijk
Categories: Language Arts & Disciplines
Type: BOOK - Published: 1997-02-01 - Publisher: SAGE
How do people engage in and competently manage discourse and interaction with others? Whether in informal, everyday conversations or professional dialogues, people "do" things while they are speaking or writing. Focusing on the fundamental interactional, social, political and cultural functions of text and talk, this comprehensive volume shows that discourse