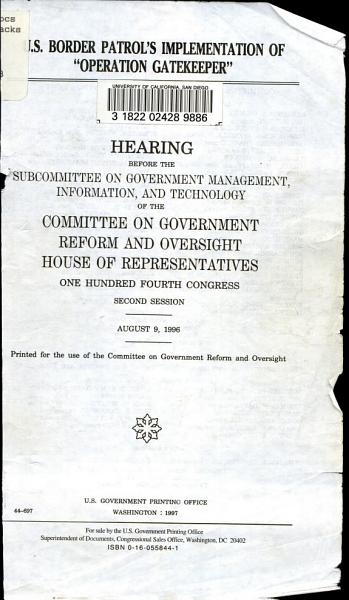 Women and Migration in the U.S.-Mexico Borderlands

Authors: Denise A. Segura, Patricia Zavella
Categories: Social Science
Type: BOOK - Published: 2007 - Publisher: Duke University Press
Seminal essays on how women adapt to the structural transformations caused by the large migration from Mexico to the U.S.A., how they create or contest representations of their identities in light of their marginality, and give voice to their own agency.

The Wall Around the West

Authors: Michael S. Malone
Categories: Political Science
Type: BOOK - Published: 2020-10-01 - Publisher: Silicon Valley Press
“A fascinating look at the history and future of this mega-region binding Mexico and the United States.”—Earl Anthony Wayne, US Ambassador to Mexico (2011–2015) Two of the most important cities in North America are so physically close they would touch were they not separated by a wall at the US-Mexico border. Th at border has been a flashpoint of contention for centuries. And yet, the untold reality in San Diego and Tijuana is that tens of thousands of people cross through that wall in both directions—lawfully—each day, to work, go to school, socialize, and visit “the other side of town.” While fights over undocumented immigration and drug trafficking continue in their respective countries, the citizens of these two cities have built a separate peace unmatched anywhere else in the world. El Tercer País tells the story of Tijuana and San Diego for the first time—an unforgettable tale of war and peaceful cooperation, dependency and shared destiny, exploitation and amity. Most of all, it tells the stories of forward-thinking individuals on both sides of the border who have brought the cities together for their mutual benefit. Th is enthralling narrative gives hope for a universal solution to one of this century’s

Tribal Government Amendments to the Homeland Security Act of 2002

Border Towns and Border Crossings: A History of the U.S.-Mexico Divide

Authors: Roger Bruns
Categories: Social Science
Type: BOOK - Published: 2019-09-19 - Publisher: ABC-CLIO
This is a compelling and revealing look at the history of the U.S.-Mexican border as a place and symbol of cross-cultural melding and a source of growing anxiety over immigration and national security. Explores the creation and development of the border in the late 19th century and the growing industrialization of the region in the early 20th century Examines the cross-border violence during the US Civil War and the Mexican Revolution, the increasing racial hostility and deportation policies in the 1930s and 1950s, and cartel violence Provides an unbiased assessment of the advent of the Chicano movement and politics on the border, NAFTA and border economics, and the increasingly hostile political debate over immigration and demands for a wall Provides critical background and contextual information to the events that have led to a turning point in America: How do we as a nation treat those seeking a new life at the border? Shows how the border has brought out feelings of community and acceptance along the border and at the same time birthed nativist and racial stereotypes Supplements political material with relatable information about the lives of cross-border workers and the blending of cultures along the border as they include

Operation Gatekeeper and Beyond

Authors: Joseph Nevins
Categories: Political Science
Type: BOOK - Published: 2010-06-10 - Publisher: Routledge
This is a major revision and update of Nevins’ earlier classic and is an ideal text for use with undergraduate students in a wide variety of courses on immigration, transnational issues, and the politics of race, inclusion and exclusion. Not only has the author brought his subject completely up to date, but as a "case" of increasing economic integration and liberalization along with growing immigration control, the US / Mexico Border and its history is put in a wider global context of similar development s elsewhere. A companion website is available at www.routledge.com/textbooks/9780415996945. The Companion Website contains key U.S. government documents related to the boundary and immigration enforcement strategy; reports from non-partisan research entities and non-governmental organizations that evaluate enforcement from a civil and human rights perspective; and studies that investigate migrant deaths in the U.S.-Mexico borderlands. There are also photo essays, including one related to deportations and another to California’s Border Field State Park, for which the site also includes historic photos and other resources. Finally, the site has links to websites—from U.S. government agencies involved in boundary and immigrant policing, to humanitarian and border, migrant, and human rights organizations.